China, Russia to Defy US Sanctions Over Support to Venezuela – Information Clearing House

KW:It is madness that the country that can’t even hold honest elections (as demonstrated once more in the recent Iowa caucases where Bernie Sanders was hndered once more) thinks it has the right to impose harmful and damaging economic sanctions on othere countries. Thankfully once more Russia and China are taking a stand against such illegal criminal activity by the U.S. Meanwhile they still continue to support Guido as their puppet unelected President of Venezuela. 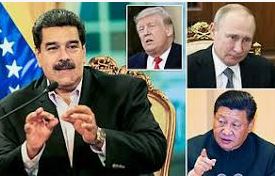 In Beijing, the foreign ministry indicated that China is against any foreign interference in the internal affairs of Venezuela and against the application of unilateral sanctions.

The Russian government rejected on Monday the U.S. threats to impose new sanctions against several Russian companies for their cooperation with Venezuela in the oil sector. Last week, the United States special representative for Venezuela, Elliott Abrams, warned Russia that its support for Venezuela will cost them economically as Washington is looking to sanction them.

“We classify this practice as harmful, we believe that many countries suffer because of this practice, we consider it contrary to international law,” Kremlin spokesman Dmitri Peskov told reporters Monday in regards to Washington’s plans.

“The United States, especially, and several other countries, unfortunately use these trade and other restrictions very frequently against third world countries, which are illegal under international law.”

Peskov added that “they use this practice more and more often in recent times to ensure their own interests in international commercial and economic affairs.”

On the other hand, in Beijing, Foreign Ministry spokesman Geng Shuang, in a media briefing session offered online, said China is against any foreign interference in the internal affairs of Venezuela and against the application of unilateral sanctions.

The United States imposed sanctions on the airline Conviasa, the largest airline in Venezuela.

The Treasury Department published on its website that the Office of Foreign Assets Control (OFAC) included 40 aircraft of this airline in the list of specially designated nationals and blocked persons (SDN).

“China’s position on the problem of Venezuela is clear and remains unchanged. We stand against any foreign interference in the internal affairs of Venezuela and against unilateral sanctions,” said the diplomat.

Since 2019, the United States in particular, and some other countries due to pressure from Washington, began applying new sanctions to Caracas, which seriously affected its economy, people’s lives and Venezuela’s relations with other nations, Geng Shuang recalled.

“We urge other countries to take into account the humanitarian reality of Venezuela, stop imposing uniteral and extraterritorial sanctions, and work to create necessary conditions that will lead to the stability of their economic growth,” said Geng.

This article was published by “teleSUR” –