A Military Junta is Now Ruling the United States: Moon of Alabama

A Military Junta is Now Ruling the United States

Notes On The Junta, An Unnecessary Land-Corridor And A Regular Russian Maneuver 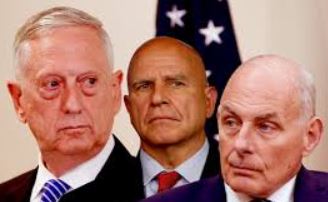 By Moon Of Alabama

August 24, 2017 “Information Clearing House” – According to a 1950s political theory The Structure of Power in American Society is mainly built on three elite groups, the high military, the corporation executives and the political directorate. (The “political directorate” can best be described as the bureaucracy, the CIA and their proxies within Congress.)

On election day I noted that only the military had supported The Not-Hillary President. The corporate and executive corners of the triangle had pushed for Hillary Clinton and continued to do so even after Trump had won. (Only recently did the “collusion with Russia” nonsense suddenly die down.) I wrote:

The military will demand its due beyond the three generals now in Trump’s cabinet.

That turned out to be right. A military junta is now ruling the United States:

Inside the White House, meanwhile, generals manage Trump’s hour-by-hour interactions and whisper in his ear — and those whispers, as with the decision this week to expand U.S. military operations in Afghanistan, often become policy.

At the core of Trump’s circle is a seasoned trio of generals with experience as battlefield commanders: White House Chief of Staff John F. Kelly, Defense Secretary Jim Mattis and national security adviser H.R. McMaster. The three men have carefully cultivated personal relationships with the president and gained his trust.
…
Kelly, Mattis and McMaster are not the only military figures serving at high levels in the Trump administration. CIA Director Mike Pompeo, Attorney General Jeff Sessions, Energy Secretary Rick Perry and Interior Secretary Ryan Zinke each served in various branches of the military, and Trump recently tapped former Army general Mark S. Inch to lead the Federal Bureau of Prisons. […] the National Security Council [..] counts two other generals on the senior staff.

With the firing of the renegade Flynn and various other Trump advisors, the Junta has already removed all independent voices in the White House. It is now  attaching more control wires to its “salesperson” marionette:

The new system, laid out in two memos co-authored by [General] Kelly and Porter and distributed to Cabinet members and White House staffers in recent days, is designed to ensure that the president won’t see any external policy documents, internal policy memos, agency reports, and even news articles that haven’t been vetted.

Trump has a weakness for the military since he attended a New York military academy during his youth.

But he does not like to be controlled. I expect him to revolt one day. He will then find that it is too late and that he is actually powerless.

The Zionist propaganda is claiming that Iran is taking over Syria and that its sole concern is to create a land-corridor between Iran and Lebanon. The AP is now reporting this myth as if it were fact. The argument the AP writers make is illogical and fails:

The land-route would be the biggest prize yet for Iran in its involvement in Syria’s six-year-old civil war. […] It would facilitate movement of Iranian-backed fighters between Iran, Iraq, Syria and Lebanon as well as the flow of weapons to Damascus and Lebanon’s Hezbollah, Iran’s main proxy group.

That landline would facilitate something that, according to further AP “reporting”, has already been achieved without it:

The route is largely being carved out by Iran’s allies and proxies, a mix of forces including troops of Syrian President Bashar Assad, Hezbollah fighters and Shiite militias on both sides of the border aiming to link up. Iran also has forces of its own Revolutionary Guard directly involved in the campaign on the Syrian side.

The usual NATO propaganda outlets are retching up fear over an upcoming Russian maneuver:

Russia is preparing to mount what could be one of its biggest military exercises since the cold war, a display of power that will be watched warily by Nato against a backdrop of east-west tensions.

Western officials and analysts estimate up to 100,000 military personnel and logistical support could participate in the Zapad (West) 17 exercise, which will take place next month in Belarus, Kaliningrad and Russia itself.

It follows a lot of speculation and obvious bullshit. In reality Zaphad is a series of smaller maneuvers taking place over some six month. It includes local police and civil defense agencies which lets the numbers look big. Each year such maneuvers take place in one of the four military districts of Russia. The number of soldiers at the core of the exercise will amount to about a division size force of 13,000-15,000 troops. Nothing, absolutely nothing, is unusual with that maneuver but the NATO propaganda attempts to make it look like an imminent Russian invasion of western Europe.

This article was first published by Moon Of Alabama –