NATO at 70: Sclerotic & bureaucratic zombie should be pensioned off: by john laughland: tuesday december 3, 2019

KW: French president Macron caused a stir last month by stating that NATO is suffering from brain death. At this week’s NATO summit marking 70 years of the Alliance, Trump and Macron are clashing. Why is it so hard for NATO to find a purpose? Is this a sign that finally, 30 years after the Cold War, it’s time to end the anti-Soviet alliance? 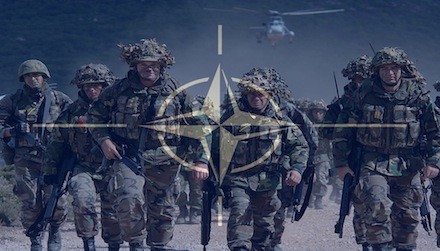 Seventy is normally considered a ripe old age at which people should be enjoying retirement. The NATO alliance, which meets to celebrate its anniversary in London, should have been pensioned off long ago.

The French president, who told the Economist in early November that NATO was “brain dead”, seems determined to jolt the alliance and its members out of their collective coma. In a joint press conference with NATO Secretary General Jens Stoltenberg in Paris on November 28, Macron tried to inject a large dose of realism and clarity into a body which years ago haemorrhaged into a sclerotic and bureaucratic zombie.

Macron’s shock therapy consists of asking the one question which, according to the German political theorist Carl Schmitt (although Macron did not quote him), constitutes the very essence of politics itself: “Who is the enemy?” Without an answer to this question, a military alliance has no purpose whatever. The fact that Emmanuel Macron had to ask it at all shows how badly NATO has lost the plot; in the theatre of the absurd, the Atlantic alliance is a character in search of an author.

NATO lists so many threats in its official Strategic Concepts of 1999 and 2010 that it sounds like Piglet in Winnie the Pooh, frightened of everything… terrorism; piracy; ethnic violence; inadequate economic reform; threats to energy supplies; arms proliferation; drug trafficking; cyber attacks; laser weapons; electronic warfare; health risks; climate change; even undefined “instability.” Yet, the word “enemy” is nowhere in the mountain of challenges NATO says it faces.

Having posed this most fundamental question, Macron then answered it. Is the enemy Russia? No. Is it China? No. The enemy, he said, is terrorism. By saying the enemy is not Russia, Macron is breaking radically with the political choices imposed on the alliance by Poland, the Baltic states and, above all, the “deep state” in Washington, a misleading expression because in the US the opposition to any Trumpian rapprochement with Moscow comes from the state in general, i.e. Congress, the armed forces, the State Department etc., and not just from the CIA or other secret services.

These factions are determined to designate Russia as an enemy, which is precisely what the European Parliament did in March when it ruled that the EU’s partnership with Russia was over.

Yet, Macron tried to remind everyone what NATO had been created to do in the first place, keep the peace in Europe. He insisted, no doubt to howls of protest from Warsaw, that peace in Europe requires a dialogue with Russia. Of course he reassured everyone that his dialogue would be “lucid, robust and demanding” but the Poles do not want any dialogue at all. Indeed, some Polish politicians – members of the European Parliament, for instance – have described Macron as Putin’s “useful idiot” for even calling for one.

In the teeth of this opposition, Macron identified the two major threats to peace in Europe, threats which should be obvious to anyone. The first is the ongoing crisis in Ukraine, the second is the US denunciation of the treaty on Intermediate Range Nuclear Forces, i.e. Russian and American missiles directed at Europe. Macron rightly said that it was intolerable that such a key issue of European security should be out of Europeans’ hands and that is why he has not only called for dialogue with Russia but has actually started one. Macron has replied to a letter from Putin suggesting a moratorium on these missiles, and published the reply, whereas other countries had said the Russian initiative should be simply thrown into the bin.

I have been arguing for months that the US decision to denounce the INF treaty is a very major development to which the media have not given adequate attention, but Macron, by contrast, has. In the 1970s and 1980s, the peace movement campaigned vigorously in Western Europe against these “euromissiles” when the Americans deployed them. Today, there is not so much as a squeak about disarmament, so deeply have people been convinced of the Russian threat by incessant propaganda. It shouldn’t need to be said that this is a very dangerous situation, but it does.

Unfortunately, although Macron has asked the right questions and given the right answers to some of them, he is surely wrong on one point. Terrorism is indeed the primary threat to the states of Western Europe but NATO is absolutely not the body to deal with it. As the events on London Bridge on November 29 showed, just like the killings in at the Prefecture of Police on the Île de la Cité in central in Paris on October 3, it takes nothing but a kitchen knife to commit a terrorist attack.

NATO is a gigantic alliance with tanks, nuclear bombs, armies, aircraft, ships and submarines. All of which are totally useless when dealing with an individual terrorist. The only things that can meet this threat are national intelligence, national policy, and national policing. None of these can be done by an international organization because they are measures which must be implemented as closely as possible to the initial problem if they are to have any success.

If Macron succeeds in establishing a new relationship with Russia on Ukraine and nuclear disarmament, he will have done his bit for peace in Europe. But if he succeeds in getting NATO to concentrate on “terrorism,” we can expect another ten years of meaningless bureaucratic waffle while innocent people continue to bleed to death on European streets.

John Laughland, who has a doctorate in philosophy from the University of Oxford and who has taught at universities in Paris and Rome, is a historian and specialist in international affairs. He is a Member of the Ron Paul Institute Educational Advisory Board.