The Back And Forth About Navalny’s ‘Poisoning’: Moon Of Alabama

KW: The west loves a good poisoning story from or about Russia 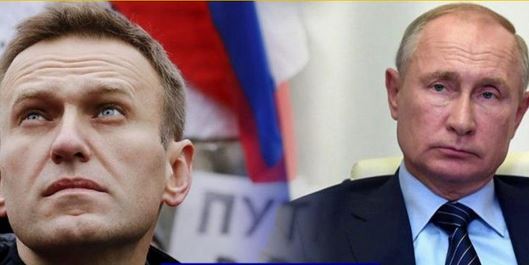 August 25, 2020: The case of the alleged ‘poisoning’ of the Russian rabble rouser Alexey Navalny is becoming more curious.

Navalny fell ill on August 20 during a flight from Tomsk in Siberia to Moscow. The plane made an emergency landing in Omsk where he was transferred to a hospital. Navalny fell into a coma. The doctors diagnosed a sharp drop in his blood sugar. Navalny has diabetes and his symptoms as described were consistent with a diabetic shock. We therefore (somewhat prematurely) concluded that Navalny was not poisoned.

After a day and a half in the Omsk hospital the patient stabilized. On request of his family he was flown to Berlin and admitted to the Charité hospital. The Charité is a very large (14,000 employees) state run university clinic that is leading in many medical fields. Its laboratories found effects consistent with the ingestion of, or contact with, a cholinesterase inhibitor:

Following his admission, Mr. Navalny underwent extensive examination by a team of Charité physicians. Clinical findings indicate poisoning with a substance from the group of cholinesterase inhibitors. The specific substance involved remains unknown, and a further series of comprehensive testing has been initiated. The effect of the poison – namely, the inhibition of cholinesterase in the body – was confirmed by multiple tests in independent laboratories.As a result of this diagnosis, the patient is now being treated with the antidote atropine.

Cholinesterase is needed in the human nerve system to break down acetylcholine which is a signaling substance between synapses. Inhibitors of cholinesterase are used in the therapy of Alzheimer’s disease, Parkinson’s disease, anxiety disorder and other illnesses. Cholinesterase inhibitors can be found in certain plant extracts or synthesized. There are two types of cholinesterase inhibitors, carbamates and organophosphates. Both types are also widely used as pesticides. During World War II organophosphates were developed as chemical weapons (tabun, sarin, soman) but not widely used.

“When Alexey Navalny was admitted to the in-patient clinic, he was examined for a wide range of narcotics, synthetic substances, psychedelic drugs and medical substances, including cholinesterase inhibitors. The result was negative,” said Sabayev, chief of the acute poisoning unit at the Omsk emergency care hospital where Navalny was treated before being airlifted to Germany.“Besides, he did not have a clinical picture, specific for poisoning with substances from the group of cholinesterase inhibitors,” Sabayev, who is also the top toxicologist in the Omsk Region and the Siberian Federal District, added.

We can be quite sure that a trained toxicologist would recognize a Cholinergic crisis. There is however a documented case from India in which an organophosphate poisoning was falsely interpreted as diabetic ketoacidosis (hat tip Bernd Neuner):

We present a 15-year-old girl who was initially treated for “diabetic ketoacidosis” with further worsening of her general condition. This delayed recovery, coupled with focused investigations, finally led us to a diagnosis and the appropriate management of an intentional overdose with organophosphorous (OP) pesticide, presenting as diabetic ketoacidosis.

But according to Kremlin spokesman Dimitry Peskov the Russian doctors made the right diagnosis and applied the correct therapy (machine translation):

The statement by German doctors on the diagnosis of FBK founder Alexei Navalny is nothing new for Russian specialists, Dmitry Peskov, press secretary of the Russian President, told reporters.“We have not yet learned anything new from this statement. We specifically contacted our doctors and asked how, from a professional point of view, we can relate to what was written. The fact is that the fact of this lowered cholinesterase was established in the first hours by our doctors in a hospital in Omsk. And the atropine, which the Germans are talking about and which is now being given to the patient, began to be administered during the first hour of the patient’s stay in intensive care,” said Peskov.

The presidential spokesman stressed that the level of cholinesterase may decrease for a variety of reasons, including from taking a number of medications. At the same time, German doctors did not identify a toxic substance in Navalny’s analyzes.

“Therefore, it is very important here to find out what caused the decrease in cholinesterase levels. And neither our doctors, nor the Germans have yet been able to establish the cause. At least, this follows from the statement of our German doctors’ colleagues. There is no substance, unfortunately, it cannot be established, analyzes do not show it,” Peskov explained.

He stressed that the analytical data of Russian and German doctors are the same, but the conclusions are different.

“We do not understand why our German colleagues are in such a hurry, using the word “poisoning”. You know, this version was among the first that our doctors considered, but I repeat once again: the substance has not yet been established. Maybe the Germans have some data,” said Peskov, noting that Russian doctors are ready to provide samples of the first tests.

If Navalny was poisoned – which is not established – the next question must be how Navalny came into contact with a cholinesterase inhibitor. Was the contact caused by himself or by someone else? Was it intentionally or unintentionally?

Navalny’s spokeswomen has insisted that the only substance Navalny ingested that morning was a tea from an airport bar. A CCTV video from the airport shows that the tea was brought from the bar by a person that then sits down with Navalny. They presumably traveled together. How would the airport barkeeper, if he supposedly poisoned Navalny, knew for whom the tea was?

As ‘western’ media continue with their “Putin poisoned Navalny” nonsense it is important to again point out that other people have more reason to harm Navalny than the Kremlin does:

During the last years Navalny has made some enemies by uncovering corruption cases. His latest one was about the local governor of Tomsk. It was also the reason why he had flown there. Should Navaly become the victim of a crime the suspects should be sought there.