I am sorry that our country voted to retain the existing flag. What an opportunity missed to establish a national identity that would be internationally recognisable and distinguish us instantly as a separate nation, a nation of individuality and substance in the South Pacific. 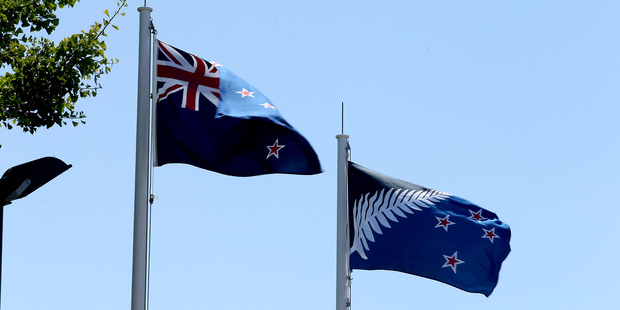 Separate from Britain or the British Empire to which we owe nothing, nothing at all. Indeed it’s the other way around. Britain owes its current freedom to countries like New Zealand who went not once but twice to its defense, without which it would have crumbled. Perhaps that was deserved because of entrenched aristocratic militaristic thinking that had a great part to play in the commencement of WW1, the punitive settlement of which had a great part to play in fueling the discontent that started WW2.

New Zealanders who went to fight in Britain’s defense in WW1 were not treated as valuable human beings and men like they should have been, respected by the British nor were they gloriously dignified, as the RSA would have us believe. No they died in the trenches of Gallipoli; not in some brave act of fighting the enemy and defending the colonial masters land of Britain itself. Brave yes, but lets not forget for one second our men and the ANZACS from Australia were viewed as mere cannon fodder to soak up Turkish bullets while the British aristocracy including if not led by Winston Churchill awaited in comfort before they came to ‘take the peninsular’ – something that they failed to do once the difficulty and extent of the slaughter became apparent. Very British.

No, we should not be proud to fly the Union Jack on OUR flag advertising Britain rather than New Zealand and holding onto a colonial past. Here in New Zealand nothing much was that different from the wars New Zealanders fought overseas for Britain. The same arrogant attitudes were apparent with the British committing countless crimes against the existing inhabitants of our country, Maori. This is the very reason why today my generation pay massive settlements to grieved Maori under Treaty of Waitangi claims in an attempt to settle these old grievances. No, New Zealand owes nothing to the British and should not be flying the Union Jack on our flag. We should be trying to eliminate this past as fast as possible and grasp hold of a new future.

Separate too from being thought of as Australia, a country that also should change its flag for similar reasons as ourselves. At international events both flags fly almost indistinguishable so that our sports-people would rather drape themselves in the black & white silver fern as this and this alone identifies New Zealanders as being from New Zealand. Instantly anyone from anywhere recognise the silver fern as being unique, not to Australia or Britain or Canada or South Africa but to New Zealand.

I am sorry the debate about a new flag got side tracked about the money, the $26 million that small minded Kiwis thought better spent on ‘meals on wheels’, schools and other such social causes rather than establishing this nations pride in an identifying flag. I don’t regret the government sponsoring and promoting this discussion about nationhood one bit.

I am sorry that the debate became sidelined as being about Prime Minister John Key and that the politically left leaning people of the country couldn’t see past their paranoia about supporting something for New Zealand rather than who was the messenger. Shame on them for their short sighted and small minded thinking. The debate wasn’t about John Key. It was about a new flag for New Zealand but so many people became caught up in an irrelevant side-show.

And what was it with Maori? The lowest turnouts were in Maori electorates and then the voting was massively in favor of the existing flag. Was it they know something more than the rest of New Zealanders or is it that they are wedded to the past and the grievance gravy train industry that the Treaty of Waitangi has become with the Crown? One would have thought that the silver fern meant much more to Maori than any other racial group in New Zealand. Shame on them if this was so.

And worse than that, shame on the people who just said ‘no’ because they fear change, excluding the rational thinking that change implies. I imagine that possibly up to half of citizens are in this category, simply too intellectually stupefied to think logically about issues preferring to watch another episode of American Idol, Criminal Minds or Madam Secretary that are fantasy and (American) propaganda of TV.

It’s sad also for the New Zealand citizens that are neither of European (or British) origin nor Maori but who are drawn from all over the world but who proudly now claim New Zealand as home. Lets face it the Asian and African links to New Zealand are becoming stronger every day and they have no link to the Union Jack. We are multi cultural and in my opinion this flag debate was a great opportunity missed. I hope it can be revisited soon.

I for one will never fly the Union Jack as representing me. Never!