KW: Having read Browder’s book Red Notice I am not surprised to hear that an investigative journalsit at Der Spiegel has discovered the story is just an anti Russian slur. It is true that Vladimir Putin wants Browder arrested and tried for tax evasion crimes in Russia. Broder no longer feels welcome in Russia so that won’t be happening any time soon!

British (American) investor Bill Browder has made a name for himself in the West through blaming Moscow for the death of his auditor, Sergey Magnitsky. Der Spiegel has picked apart his story and uncovers it has major credibility problems.

Meanwhile attending to really important matters of the day Donald Trump pardoned a couple of Turkeys ‘Bread’ and “Butter’ from thanks giving sacrifice while obedient Melania looked on. Trumps speech referred to all the turkey’s that have given evidence in the Democratic Party ‘show’ impeachement trial led by Adam Shiff 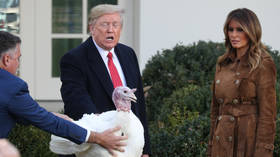