KW: With such pleading honesty how could anyone not believe Kushner isn’t the angel himself 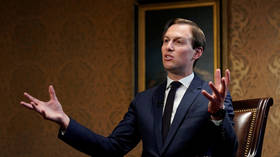 A $50 billion plan for Palestine’s economy that hinges on peace with Israel has been revealed by Donald Trump’s son-in-law Jared Kushner. He calls it the “opportunity of the century” but a chorus of Palestinian groups disagrees.