KW: Signed by the US and the USSR back in 1987, the INF Treaty has been a cornerstone of European security for years. The agreement banned ground-based missiles with a range between 500km and 5,500km – plenty of which had been deployed by both sides in the Cold War at that time. Over recent years, the US has been accusing Russia of violating the accord by building missiles it prohibited – something that Moscow vehemently denied.

PC Roberts writes…“The meetings in Beijing during January 30-31 between Washington, Russia, China, France and the UK apparently failed to preserve the commitment to prohibit intermediate range nuclear weapons. Washington stuck to its determination to withdraw from the historic agreement of Reagan and Gorbachev to destroy all land-based intermediate range nuclear missiles. This US withdrawal from a nuclear weapons reduction agreement follows the George W. Bush/Cheney regime’s withdrawal from the anti-ballistic missile treaty. Indeed, since the Clinton regime, every US president has produced worsening trust between the two major nuclear powers. No good can come of this as Russia’s Deputy Foreign Minister Sergey Ryabkov said at the Beijing meeting.

The intermediate range nuclear missile treaty (INF) does not involve US security. It protects Europe from Russian missiles and Russia from US missiles stationed in Europe. Trump’s announcement that he is breaking free of the treaty tells the Russians that they are going to have missiles on their borders that allow them no response time. The Europeans are crazy to go along with this as they will be targeted by Russia in turn, but the Europeans are Washington’s vassals.

Ever since Clinton broke Washington’s promise not to move NATO eastward, Russia has known that Washington seeks military advantage over Russia. By leaving the ABM treaty, the George W. Bush regime told Russia that Washington intended to gain superiority by constructing an anti-ballistic missile shield that would negate Russia’s retaliatory capability, thus subjecting Russia to nuclear blackmail. Russia responded with new hypersonic ICBMs that cannot be intercepted and now holds nuclear superiority over the US, but does not exploit it. The US response is to tear up the INF treaty and put its missiles back on Russia’s borders.

Breaking the INF treaty is a sure-fire way to initiate a new arms race which would provide justification for the trillion dollars of taxpayers’ money that Washington is handing over to the military/security complex for more nuclear weapons. Yet another way to look at the demise of the treaty is that Washington wants out of the treaty so that it can deploy intermediate range missiles against China. Washington has actually drawn up plans for war against Russia and China and has conducted simulations of what the outcome would be. America wins, of course.

The dangerous idea that a nuclear war can be won has been pushed for some years by the neoconservatives who are committed to US hegemony over the world. This idea definitely serves the material interest of the military/security complex and is very popular among the power brokers in Washington The situation is serious. Very little is reported in US media of the resurrection of the nuclear arms race, and what is reported is blamed on Russia and China. Americans hear that it is China, not the US, that is militarizing the South China Sea and Russia that intends to restore the Soviet empire and that these intentions are threats to American national security. The evidence consists of assertion. The Russians have offered proof that they have not violated the INF treaty, but Washington doesn’t care because Washington is not leaving the treaty because of Russian violations..

Washington is leaving the treaty because Washington wants military hegemony over Russia and China and a good excuse to hand over another trillion dollars to the military/security complex. In the end capitalism does more than exploit labor. It ends life on earth

Traditionally, an aggressor paves the way to war with constant propaganda against the country to be attacked. The propaganda creates public support and justifies the attack. The constant stream of provocative accusations out of Washington against Russia and China (and Iran) in order to justify treaty breaking and higher armaments spending sounds to Russia and China like they are being set up for attack. It is reckless and irresponsible to convince nuclear powers that they are going to be attacked. There is no more certain way of producing war. Russia and China are hearing what Saddam Hussein heard, what Gaddafi heard, what Assad heard, what Iran hears. Unlike these victims of Washington, Russia and China have substantial offensive capability. When a country is convinced it is targeted for attack, does the country just sit there and await the attack?

Washington might be setting up America for a first strike with the extraordinary stream of accusations and provocations issuing from people too stupid to be in possession of nuclear weapons. In the nuclear era, it is reckless for a government to replace diplomacy with threats and coercion. Washington’s recklessness is the most dangerous threat that the world faces .” 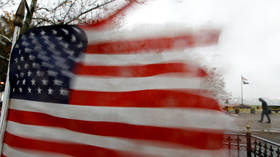 Secretary of State Mike Pompeo has announced that the US will withdraw from the Intermediate Range Nuclear Forces treaty immediately, prompting threats of a Russian “response” from Moscow.