The Air War In Afghanistan Expands On Both Sides-MoA

The Air War In Afghanistan Expands On Both Sides

Under the Trump administration U.S. air attacks in Afghanistan have sharply increased. But it now seems that the Taliban have acquired some means to counter them.

Last year the U.S. dropped a record number of bombs on Afghanistan leading to ever increasing casualties among civilians:

According to the Combined Forces Air Component Commander (CFACC) 2013-2019 Airpower Statistics released in late January, 7,423 missions flown in Afghanistan in 2019 resulted in weapons being released. There were more weapon releases in most months of the year than in any corresponding months since records were first released in 2009, with September recording the most for the year at 948.The previous annual record was 7,362 set in 2018, and the last two years together have seen more weapon releases over Afghanistan than the combined number for 2012 through to 2017.

Twenty bombing strikes per day is a quite astonishing number. Many civilians get killed in this U.S. bombing campaign. The U.S. often seems not to know who it is hitting. This report from last week is typical:

A drone attack carried out by U.S. forces earlier this month in western Afghanistan that apparently targeted a splinter Taliban group also killed at least 10 civilians, including three women and three children, an Afghan rights official and a council member said Wednesday.
…
There was no immediate comment from the Afghan military or the U.S. forces. But Wakil Ahmad Karokhi, a provincial council member in Herat, said the Jan. 8 strike also killed the commander of a Taliban splinter group, known as Mullah Nangyalia, along with 15 other militants.
…
The commanders funeral the following day was held in the Herat provincial capital’s Guzargah neighborhood, and was attended by dozens of militants.Karokhi criticized the strike as “huge mistake” saying the commander had been a useful buffer against the Taliban in Shindand district, taking up arms with his fighters against the insurgents “when no one else would do it” and leaving the area’s civilians in peace.

The U.S. military and its allies and Afghan proxies are not the only ones fighting. The Taliban can hit back at helicopters and planes and, judging from the number of recent air incidents, they now have found effective means to do so. Two days ago they destroyed another helicopter:

Its #Moldova flag. Helicopter got hit pretty bad. True miracle there are no deaths

This is the 4th helicopter that went down in January

Four helicopter losses in one month is quite significant.

Earlier today there were reports that a civilian Afghan airliner had come down. Those turned out to be false. But a plane had indeed crashed in Ghazni province south of Kabul. It was a military one:

There are video of the burning and burned out plane. 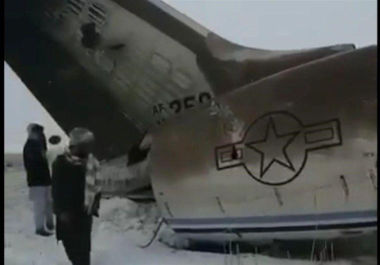 bigger
Afghan sources say the Taliban claimed that they shot down the plane. Others deny that. What is sure though is that the plane crashed into Taliban held territory. At least two persons on board were killed. 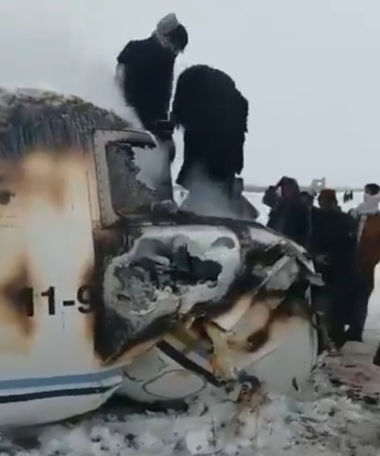 bigger
The “BACN” flying radio relay stations have been in Afghanistan for a while. A military report from March 2017 said:

Called “as essential to mission success as bullets,” the E-11A Battlefield Airborne Communications Node flew its 10,000th sortie Feb. 24, 2017 at Kandahar Airfield, Afghanistan, since arriving in Afghanistan eight years ago.The 430th Expeditionary Electronic Squadron operating out of Kandahar is the only unit in the U.S. Air Force that operates the E-11A with the BACN payload. It was created to fulfill what is called a joint urgent operational need, when it was identified that the terrain of Afghanistan posed serious communication challenges.

bigger
There appear to exist only four of these planes which are heavily modified Bombardier Global 6000 ultra long-range business jets. They are only used in Afghanistan.

The loss is significant. The ground troops depend on radio communication when they direct bombers to their targets. Without the flying relay stations they have no chance to do so in Afghanistan’s mountainous terrain.

It is not known what new means the Taliban have to take down planes and helicopters. In 2018 a few Stinger anti-air missiles were found during a raid on some Taliban. But those seem to have been old and were probably no longer functioning. Helicopters can be brought down with machine guns or even with anti-tank missiles (RPGs).

But the E-11A usually fly at a significant altitude and the crashed plane was not near an airport. The usual man-portable air-defense missiles (MANPAD) like the U.S. made Stinger reach a maximum altitude of only some 3.500 meters.

That opens the possibility that the Taliban have acquired new supplies of larger missiles. One wonders where those would come from.

On January 5 Hizbullah leader Hassan Nazrallah announced how the ‘resistance axis’ would respond to the U.S. murder of the Iranian General Soleimani and the Iraqi PMU leader Al-Muhandis.

The response to the blood of Soleimani and Al-Muhandis must be expulsion of all U.S. forces from the region.

Using effective means to take down even high flying U.S. planes would be one possible way to achieve that aim.

But Iran is not the only possible source of such missiles. China and Russia also produce effective anti-air missiles and the military in Pakistan and in Tajikistan have bought those in significant numbers. All these countries usually hold back from providing anti-air missiles to militants as they could also endanger their own (civil) airplanes.

But the loss of five aircraft in one month in Afghanistan might well mean that this has changed.

I view this as a serious escalation in the world war that is going on as we speak. If the Taliban are being armed in such a way to be able to take down U.S. aircraft, then the opponents of the West are seeing the writing on the wall and are getting more serious.

Yes, bet Iran will be blamed for this somehow if it is indeed an american plane that was shot down.

If the $1.6 trillion cost of the US military being in Afghanistan is correct, then the loss of 4 helicopters and even the E11 won’t significantly increase US overall spend there. $1.6 trillion over 18 years is a tad under $250 million per day

Yes, there is some talk even in Afghan media about Taliban getting Manpads if the US refuses to withdraw.

But i would caution about the aircraft crashes this month. Air attrition of the Afghan Airforce has been pretty high during the last several years and their choppers go down relatively often.

US aircraft fall from time to time too.

9/11 was the excuse to invade Iraq.
At least Saddam and al qaeda were Sunni.

But Iran is not the only possible source of such missiles. China and Russia also produce effective anti-air missiles and the military in Pakistan and in Tajikistan have bought those in significant numbers. All these countries usually hold back from providing anti-air missiles to militants as they could also endanger their own (civil) airplanes.

In one paragraph you have written what will take the media 10 years to work out.

One of the main Taliban Twitter accounts, @Zabehulah_M33, has posted the following tweets (machine translated):

US invasion plane crashes in Ghazni, killing scores of officersFollowing a raid today in Sadukhel district of Dehik district of Ghazni province, a US special aircraft carrier was flying over an intelligence mission in the area.

The aircraft was destroyed with all its crew and crew, including the major US intelligence officers (CIA).

It is noteworthy that recently, in the provinces of Helmand, Balkh and some other parts of the country, large numbers of enemy aircraft and helicopters have fallen and fallen.

# Important News:
A Ghazni helicopter crashed in the area near Sharana, the capital of Paktika province, this evening after the Ghazni incident.
The helicopter crew and the soldiers were all destroyed.(source)

So Taliban has not taken responsibility for the E-11A crash (although many news outlets are reporting it, including Russian ones). Meanwhile, yet another helicopter crashed after the E-11A crash, so it’s two crashes in one day.

Does this mean that Air Force One is also a possible target if it comes into the area?

Given the price on Trump’s head I wouldn’t be surprised if an attempt is made.

The new ME peace plan that Trump is going to be forced to accept includes having all US troops leave the invaded countries. Then maybe Occupied Palestine would have to learn to play nice with its neighbors…..or leave.

What will empire do to try and regain control of the global narrative? Certainly the Kushner peace plan is a non-starter in spite of its backing.

Opium production down then? Some faction needing to make a point maybe?

1) Taliban was never officially recognised as the sovereign government of Afghanistan.

2) The Soviet Union never invaded Afghanistan, they were invited in in by then sovereign UN-recognised Gov of Afghan (golly wonder why)

3) Al-Queda was never part of the Taliban, nor is imported ISIS,

More photos of the E-11A crash.