The History – and Hypocrisy – of US Meddling in Venezuela 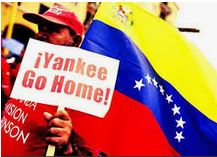 Author and activist Brett Wilkins looks at the history of US meddling in Venezuela.

January 28, 2019 “Information Clearing House” –     There isn’t a nation in the Western Hemisphere that hasn’t at one time or another found itself caught in the far-reaching tentacles of US imperialism. Venezuela is certainly no exception. Washington has been meddling in its internal affairs since the 19th century and it continues to do so to this very day, when the specter of yet another US-backed coup, or even a direct American military intervention, looms larger by the day.

A Long History of Meddling

During most of the 20th century, US interference in Venezuela was mostly about oil, but that wasn’t always the case in earlier times. Washington’s involvement in the 1895 boundary dispute between Venezuela and Britain was a key event in the emergence of the United States as a world power as the Grover Cleveland administration, invoking the Monroe Doctrine prohibition against European colonization of the Americas, successfully sided with Venezuela. The Cleveland administration, which noted that “today the United States is practically sovereign on this continent,” issued thinly veiled threats of war against Britain, which eventually acquiesced to US demands.

Later, during the Dutch-Venezuelan crisis of 1908, the US Navy helped Venezuelan Vice President Juan Vicente Gómez seize power in a coup. Gómez, known as “The Catfish,” would rule the country either directly or through puppet presidents, until his death in 1935. His regime was one of inconceivably medieval brutality. His enforcers were fond of shackling political prisoners in grillos, leg irons that rendered many victims permanently disabled — and those were the “lucky” ones. The unlucky ones were hanged to death by meathooks through their throats or testicles.

Gómez was fantastically corrupt. He was believed to be worth a staggering $200 million, or more than $3.6 billion today, at the time of his death. However, he endeared himself to Washington and Wall Street by granting highly lucrative concessions to foreign oil companies including Standard Oil (ExxonMobil today) and Royal Dutch Shell. Rómulo Betancourt, who served two presidential terms in the mid-20th century and is considered the founding father of modern democratic Venezuela, wrote that Gómez “was the instrument of foreign control of the Venezuelan economy, the ally and servant of powerful outside interests.”

The exploitation of Venezuela’s tremendous petroleum resources has been the constant objective of US policy and action toward the South American state for over a century. This meant backing the viciously repressive dictator Marcos Pérez Jiménez (1948-1958), whose regime forces subjected political prisoners to tortures every bit as horrific as those committed during the Gómez era. Jiménez was as generous to transnational corporations as he was cruel to his own people. The United States, which cared about the former far more than the latter, counted the despot as a close ally, even awarding him the military Legion of Merit “for exceptionally meritorious conduct in the performance of outstanding services and achievements” and providing his dreaded Directorate of National Security (DSN) with invaluable assistance as it imprisoned, tortured and murdered thousands of innocent Venezuelans.

A few years after Venezuela shifted to democracy in 1958, most other South American nations began falling under the iron-fisted rule of US-backed military dictatorships. The military and security forces of these repressive coup regimes were often trained by the United States, at the US Army School of the Americas and elsewhere, in kidnapping, torture, assassination and democracy suppression. As US-backed death squads trained from US-authored torture manuals murdered, tortured and terrorized innocent men, women and children from Central America to Argentina, Venezuelans enjoyed decades of peace and prosperity. However, the US never stopped meddling in Venezuela’s affairs, and after the free and fair election of Hugo Chávez in 1998 and the subsequent launch of the Bolivarian Revolution, US meddling would reach levels that would shock the conscience of the world.

The Bolivarian Revolution, a series of economic and social reforms that dramatically reduced poverty and illiteracy while greatly improving health and other living conditions for millions of Venezuelans, drew worldwide acclaim. The reforms, which included nationalizing key components of the nation’s economy as part of an agenda of socialist uplift, made Chávez a hero to millions of people and the enemy of Venezuela’s oligarchs. The exportation of the Bolivarian Revolution, which included forging stronger, more peaceful inter-American relations and even the provision of free home heating oil for hundreds of thousands of needy people in the United States, made Chávez a marked man in Washington.

The administration of George W. Bush — whom Chávez infamously called “the devil” in a speech before the United Nations — backed a failed military coup against Chávez in 2002. The attempted coup was closely linked to prominent neoconservatives including Elliott Abrams, the disgraced Iran-Contra criminal who played a key role in covering up massacres committed by US-backed death squads in Central America and Otto Reich, a staunch supporter of Cuban exile terrorists who have killed at least hundreds of innocent men, women and children throughout the Americas. Two key coup plotters, Army commander Efraín Vasquez and Gen. Ramirez Poveda, were trained at the US Army School of the Americas. The coup briefly ousted Chávez but loyalist forces and popular support restored his rule 47 hours later.

Barack Obama continued Bush’s policy of demonizing Chávez, whose government he called “authoritarian.” This, despite the fact that former president Jimmy Carter, who won the Nobel Peace Prize for his work at the election-monitoring Carter Center, called Venezuela’s election process “the best in the world.” In 2015, Obama declared Venezuela an “extraordinary threat to national security,” a bewildering assertion considering the country has never started a war in its history. The United States, on the other hand, has intervened in, attacked, invaded or occupied Latin American and Caribbean nations more than 50 times and, as Obama spoke, the US military was busy bombing seven countries in the Middle East, North Africa and South Asia. For decades, successive US administrations have also lavished Venezuela’s neighbor Colombia — which has been condemned for its government and paramilitary death squad massacres and deadly corporate-backed crackdowns on indigenous peoples and workers — with billions upon billions of dollars in military and economic aid.

In an act of breathtaking yet typical US hypocrisy, President Donald Trump in July 2017 announced economic sanctions against Nicolás Maduro, who was elected president following the death of Chávez in 2013. While Maduro vowed to continue the Bolivarian Revolution, the Trump administration threatened to attack Venezuela, citing the “suffering” of its people. Meanwhile, Trump continued previous administrations’ support for some of the world’s worst human rights violators, including the Islamic fundamentalist monarchy of Saudi Arabia — which is waging a war of aggression and starvation in Yemen that has claimed tens of thousands of lives, while severely repressing its own subjects at home — as well as brutal dictators in Bahrain, Ethiopia, Equatorial Guinea, South Sudan, Turkmenistan, Uzbekistan and elsewhere. While bashing Maduro, Trump has heaped praise upon North Korean dictator Kim Jong-un, leader of the world’s most murderous regime, Philippines’ “death squad mayor”-turned president Rodrigo Duterte, China’s “president for life” Xi Jinping, Turkish strongman Recep Tayyip Erdoğan, Vladimir Putin and other unsavories.

Trump’s latest moves, recognizing Venezuela’s illegitimate would-be presidential usurper Juan Guaidó and appointing the neoconservative regime change hawk Elliott Abrams as special envoy, seems designed to sow seeds of subversion and revolt within the country’s government and military. This follows National Security Adviser John Bolton —  a key neocon architect and cheerleader for the 2003 invasion of Iraq and who has also advocated regime change in Iran, Venezuela and elsewhere — calling Venezuela, Cuba and Nicaragua a “troika of tyranny,” a hypocritical characterization reminiscent of Bush’s “axis of evil,” and one that utterly ignores the far worse, but far more subservient, regimes backed by the Trump administration.

The United States has almost always opposed — whether by slaughter, spies or sanctions — any government or movement that seeks to freely choose its own political and economic path if it diverges from the corporate capitalist order backed by Washington and Wall Street. It has long sought to crush the boldly defiant Bolivarian Revolution, just as it has crushed countless popular revolutions and movements before. The Maduro regime is far from perfect. But to call Maduro a dictator and to advocate regime change in Caracas while supporting far worse tyrants around the world just because they’re US-friendly is an exercise in the blatant, bloody hypocrisy for which the United States has long been infamous around the planet, especially among its poorer parts and peoples.

Brett Wilkins is a San Francisco-based author and activist. His work, which focuses on issues of war and peace and human rights, is archived at www.brettwilkins.com